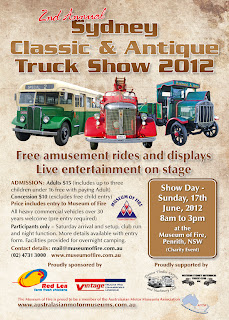 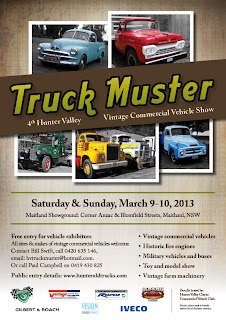 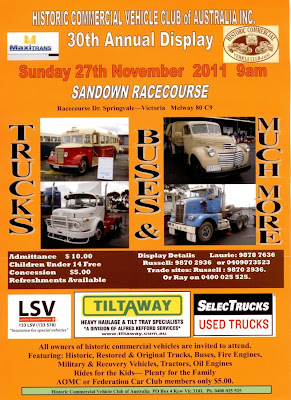 So there were these two Albions in a paddock... 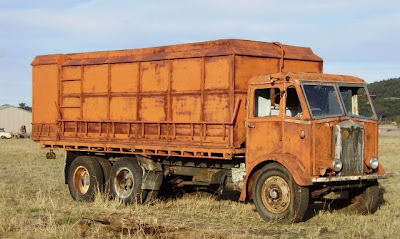 Earlier this year Ian Storrie recovered a couple of Albion six-wheelers from the paddock where they had sat for eight years. Both very complete and solid, Ian had them carted home by the same guy who delivered them to the paddock!

Ian has done a bit of research and discovered the trucks were well known in the area.

“From talking to old timers that know the vehicles from their working days, they were well looked after and worked their arses off with max bin capacity and no regard for weight limits”, he said.

“The older one has a tare weight of 6T and aggregate of 14T but they were capable of carrying well in excess of that due to the bin sizes ... and always did!”

The previous owner has been of considerable help with spare parts and also confirming the work the two trucks did. Ian continues:

“They were only ever used by Paul and his father for grain cartage during the grain harvest. The rest of the time they were shedded at a suburban street address in Gunnedah. His father, a talented mechanic, couldn't read or write and did have a job as a mechanic but the trucks were registered in his wife's name until Paul was old enough the have them registered in his name.

“Paul told me the standard load for the [FT37EL] was 22T and the [FT103L] carried 16T and that, during harvest, both he, also a mechanic, and his dad took holidays from their jobs to cart grain and make good money.”

The older FT103L previously worked for Chadwick’s in Newcastle and the name can just be made out on the driver’s door still. The FT37EL – ‘the big one’ as Ian calls her – started out on a farm at Mullaley owned by a chap called McBurnie. He sold up to a K Evans and the truck stayed on the farm until Paul and his Dad acquired her.

Paul’s Dad, an Albion man through and through, used to drive one of the older models for the coal mine at Werris Creek in the early days and used to swear by their reliability.

Neither truck has its original drive unit as both now have a lazy axle. The rear axle in both trucks had the diff centre moved and was plated over while the other axle had her guts replaced by an Eaton No. 3. 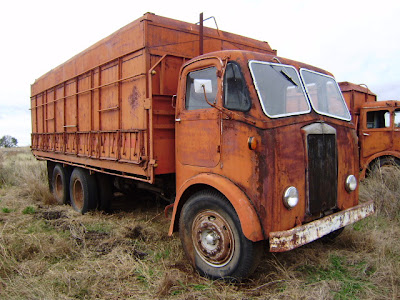 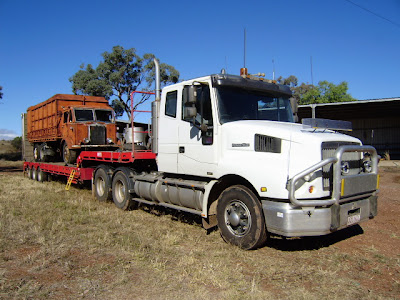 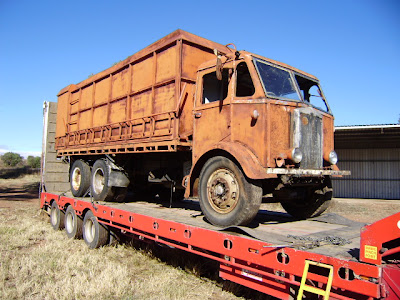 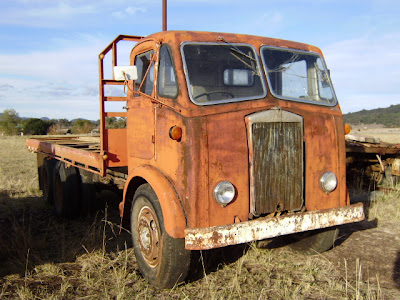 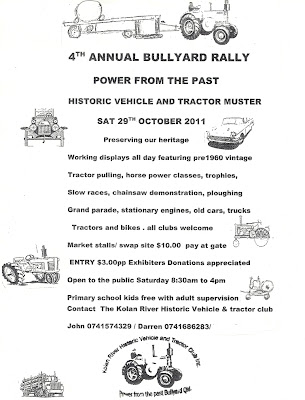 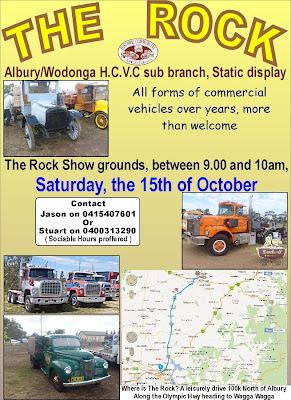 For those of us who kick around old machines - not just old trucks - Lake Goldsmith is a name that pops up fairly regularly. Located 50kms due west of Ballarat, Victoria, it is home to the Lake Goldsmith Steam Preservation Association and their permanent displays. The Association hosts two rallies each year (in May and November although this year's November rally is over the last weekend in October). These always prove popular with many enthusiasts bringing their vehicles along to join the fun. Have a look here for more information - Lake Goldsmith Rally.

Back in May Peter Lynch, author and Dodge owner, sent me the photos below. While completely out of date now they do give an idea of some of the trucks that attend to support the steam activities. The Dodge in the second photo is Peter's truck and only had 28,000 miles on the clock when he bought her from a farm at Winchelsea.

Above: The ever-popular International comes in many guises, each as classic and as well-loved as the other. The truck with the bar work is a Perkins-powered ASD-182 owned by George Pyers. Below: Peter's Dodge in good company. Note the 'dome' on the roof of the Austin camper! 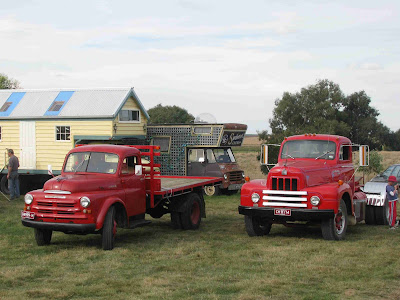 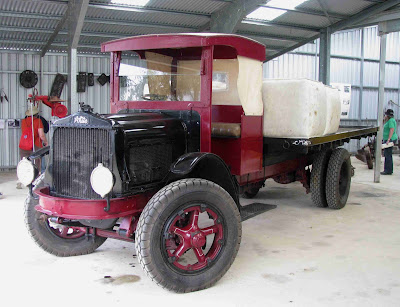 Above: this early White is, I believe, a Lake Goldsmith resident. She featured on the rear cover of a recent Vintage Trucks And Commercials Magazine issue but do you think I can find it to provide more detail?! She's got Lake Goldsmith bales of wool on her back. Below: the late-1930s Chev is one of the more 'classic' looking trucks on the scene. This one has an Australian-built Holden cab. 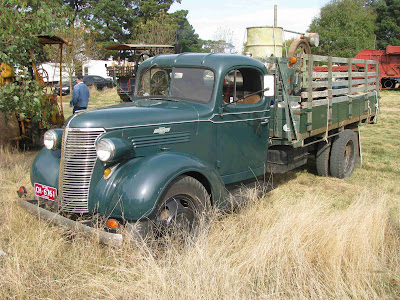 The greatest road run ever held in Australia for classic commercials.
Watch this space for a few photos from Andrew Blacklock. I attended as well and shot 790 photos just south of Bargo, at Marulan BP truck stop and at the railway bridge in the Cullerin Ranges. A selection of these photos have been sent off to Vintage Trucks and Commercials Magazine so I will hold off posting them until I see what VTCM uses in their next issue. They may also appear in the HCVC newsletter The Monitor and in Queensland's Heritage Hauler as well as in a slide show on the Hunter Valley Classic Commercial Vehicle Club's website. On top of that the industry magazine Prime Mover may also be using some for an article on the run.
I was pretty happy with the results but the job was made easier by there being several trucks that you simply could not take a bad photo of. They just looked so right.
Congratulations to the organisers (Bruce Gunter, Kirky, the Western Sydney Historic Truck Club et al) and to the Hume runners. Everyone was on an absolute high enjoying each other's company and their old vehicles. This run was what the old truck scene is all about and the spirit in which it was organised, attended and enjoyed was truly epic. To make it a truly great event almost $9,000 was raised for kids with autism. Big trucks, bigger hearts.
Would you believe organising and registrations for the 2013 run are already happening!
Posted by Andy Wright at 09:02 No comments:

My wife watched this movie on DVD the other day and said there were a few old trucks to keep an eye out for. Set in 1968, and telling the story of the women machinists at Ford's Dagenham plant in England going on strike to achieve equal pay with the men, there are a lot of street scenes suitably 'dressed' with period vehicles. Period cars and footage inside the plant abound but there are some good commercials to keep an eye out for.

Off the top of my head I spotted, among others, a Leyland FG 'three-penny bit' furniture van, TK Bedford, Thames van and a great shot of a 'Sputnik' Thames Trader prime mover and car transporter combination turning a corner. There was also a Bristol double-decker in the background and a SWB Bedford bus (possibly on a TJ chassis?) that featured prominently as it carted the ladies around the country. These were all 'live' and not archive footage (film was shot last year too).

One of my beefs with these 'period' shows, particularly American ones, is you rarely see more than just cars and utes/pick-ups in street scenes. There's rarely a truck making a delivery or a long-distance haulier passing through town or out on the road. To see the effort made in this English film was quite gratifying. Check it out.

I also recommend the Catherine Cookson film The Round Tower. Local lad starts a transport business with a Dennis if I recall correctly and later has a fleet of Fodens. Quality viewing!
Posted by Andy Wright at 09:19 No comments: 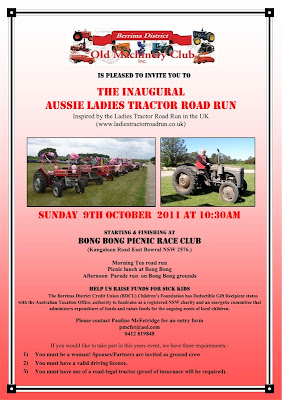 ...and now for something completely different. Click on the image for a larger copy. 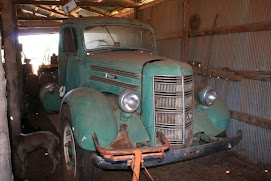 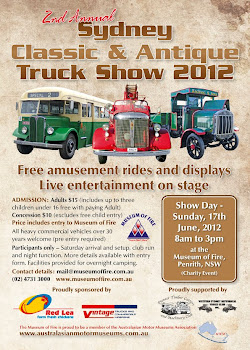 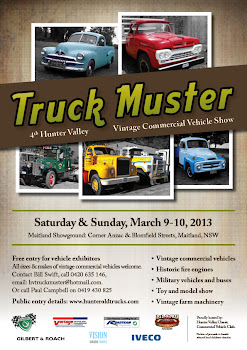